There are thousands of reasons to visit Armenia, but some of them are truly exciting! I’ve compiled a short list of interesting facts about the Armenian culture. If you find this article informative please ping me on Instagram or Twitter, with #ArmeniaTravelTips.

1. Armenia – the cradle of civilization

Armenia is one of the oldest countries in the world. A large number of significant archeological findings and old manuscripts prove that Ancient Armenia was a developed, flourishing civilization.

The oldest leather shoe was found in Areni, Armenia in 2008. It’s considered to be around 5500 years old and has been preserved in an excellent condition. You can visit the Areni-1 cave where it was found – it’s a pretty interesting cave complex now that is an excellent attraction for travelers.

The Areni winery is part of the village Areni, positioned on the banks of the Arpa River, being one of the oldest wineries on the globe, in which wine production was done more than six thousand years ago. It’s in the same location as the above-mentioned cave. Here, archaeologists identified juice presses, devices for fermentation, drinking glasses, and even some remnants of the vine and seeds. Specialists raised that the original wine used more than six thousand years ago may be the ancestor of the all-time popular Pinot Noir range. As for today, this blend is obtained in France from grapes of this Armenian variety.

Armenia’s capital, Yerevan, is one of the earliest documented towns on the globe. It is positioned in the north-eastern area of the Ararat Valley, and specialists believe it was founded back in 782 by the king of Argishti I. Just to give you an idea how old that is: Yerevan is 29 years older than Rome!

2. Chess is taught in all public schools across the country

Since the 9th century, chess has steadily gained attention and popularity in Armenia. Several Armenian manuscripts dating back to the 12th and 13th centuries show this was a preferred activity amongst Armenians of that time. Today, these manuscripts are exhibited in Matenadaran, the famous museum and repository of oldest manuscripts.

Between 1960 and 1969, the 9th world chess champion was Tigran Petrosyan, an Armenian chess player representing the Soviet Union. Since then Armenian chess players have been consistently ranking among the strongest in the world. Looking at any prestigious chess tournament, such as European Team Championship, Chess Olympics, Armenian players consistently appear among winners. One of the players of the Armenian National team, Levon Aronian, is well-known due to his continuous victories.

But Armenians took the love for chess to a completely new level when they added chess to the school curriculum in 2011. Children learn how to play chess and practice regularly, starting from the first grade. This is meant to advance children’s mental abilities and develop critical and strategic thinking. The study program ranks among the most efficient courses internationally.

And if you are not a fan of chess, nardi Armenian game might interest you.

3. Armenia – the first to embrace Christianity

Armenia was the first state which adopted Christianity as a state religion. Moreover, the Armenian Apostolic Church gained its name thanks to the apostles of Jesus Christ, Thaddeus, and Bartholomew, who preached all around the country. As such, Armenia is the first country in history that converted to Christianity, and it was baptized back in 301 by Gregory the Illuminator (Lusavorich). Some even wonder how Armenia remained Christian despite of being surrounded by powerful Muslim states. This is especially amazing taken the fact that Armenians practiced paganism before Christianity and even traces of Zoroastrianism in Armenia were found.

In fact, the first time the Bible was translated in the Armenian language in the 5th century by Mesrop Mashtots – commonly known as the “inventor” of the Armenian alphabet. Btw, if you are curious what the Bible verses look like in Armenian, check out my review of the best Armenian Bible app.

The first church on the globe was constructed in Armenia

Another interesting fact about this country is that the Echmiadzin Cathedral was the first official church built in the 4th century. According to the legend, Gregory the Illuminator (Lusavorich) had a dream about Christ descending from heaven with a fire toll pinpointing the location for the future holy place. As a result, in 303 in the exact place shown in the dream, the foundation of the church in Etchmiadzin was placed. This claim is disputed though, to be fair, because technically it’s not a church, but a cathedral. Nevertheless, just the simple fact of how old this place of worship is, shows how deeply is Christianity rooted in the Armenian culture.

Also, nowadays, the Spear of Christ (Spear of Longinus), the one used by the Roman warrior Longinus to impale Jesus Christ, is preserved in the treasury of the Etchmiadzin Cathedral. As of 2000, this cathedral was acclaimed as one of the UNESCO World Heritage Sites in Armenia, listed with some other impressive sites.

4. The language – an isolate with a unique alphabet

Armenian has no genetic connection with any other language and is considered to be a separate branch of the Indo-European language family. Even if some words may sound familiar to you, scientists believe that it didn’t descend from any other language. So, it’s nowhere near to what you’ve ever heard.

Just as the language, the alphabet too, is unique. These characters are not used in any other written language. The scientist and monk Mesrop Mashtots put the basis of a unique Armenian alphabet between 405 and 406. The core of this alphabet consisted of the ancient Armenian language and its 28 unique letters, which were not meant to correspond to a sound within the Armenian language. The Mashtots alphabet ended up consisting of 36 letters. Seven of them are vowels, while the remaining 29 are consonants.

Starting with the XII century, two additional letters were included in the alphabet. And nowadays, researchers classify the Armenian alphabet amongst the most advanced and well-thought lettering systems, next to the Georgian and Korean alphabets.

By the way, one of the oldest surviving text in Armenian is the 5th century Bible translation which, along with many other  ancient Armenian manuscripts, is kept at Matenadaran in Yerevan. Matenadaran is the Institute of Ancient Manuscripts and it represents one of the biggest manuscript directories in the world. What’s more, some of those manuscripts have very interesting and intricate designs, one category of which is called trchnakir or bird letters.

You’ll probably think that it must be difficult to learn Armenian. Here you can learn a bit more about how difficult Armenian is. Spoiler alert – it is quite a nut to crack! And that is why I’ve written a separate post on this, to help you to easily get by without knowing the Armenian language.

5. The main symbol of Armenia, Ararat mountain, is located outside of Armenia

Another one among the most interesting facts about the Armenian culture is related to Mount Ararat which you can often see in the background of most photos showing the skyline of Yerevan, the Armenian capital. Ararat range comprises two extinct volcanoes, the Greater Ararat (Masis, 5165 m) and Lesser Ararat (Sis, 3927 m).

Even though currently the mountain is not located in Armenia, but rather in the eastern side of Turkey, it plays a very significant role in Armenian culture. As the first country in the world to make Christianity its official religion, Armenians view religious matters as inseparable from their national identity. According to the Bible, Noah landed on this mountain in his ark shortly after the waters of the Great Flood started to recede. “And the ark stopped on the mountains of Ararat in the seventh month, on the seventeenth day of the month” it says.

The entire range was assigned to Turkey under the Kars Treaty in 1921. It’s worth noting that the modern Armenian Republic doesn’t acknowledge this treaty. In fact, many Armenians still refer to the eastern part of Turkey (including the Mount Ararat) as “Western Armenia”.

6. There are more Armenians abroad than in Armenia

Back in 1915, in the middle of the World War I, the Ottoman empire commited a genocide exterminating around 1.5 million Armenians. During and after these events, millions of Armenians had to flee abroad. They found refuge in dozens of countries like France, Italy, Lebanon, USA.

Armenians established very strong communities abroad, preserved their religion and language and are now referred to as “Spyoork” aka Diaspora. Spyoork speaks the Western “version” of the Armenian language. I wrote a little bit about the differences between the Westerns and Eastern Armenian in this post dedicated to Armenian language learning apps. Check it out if you want to learn more.

Just imagine the following! Currently the population of Armenia is around 3 million and there are around 7 million Spyoork Armenians spread all over the world. Some people jokingly say that Armenia is the office of Armenians. 🙂

7. The Wings of Tatev: the longest aerial cableway in the world

The world record for the “longest non-stop double track cable car” is held by the “Wings of Tatev”, an aerial tramway in a beautiful mountainous village in the south of Armenia. The total length of the cableway is 5.7 km (3.5 miles) and the highest point is at 320 meters above the river gorge.

During the 12 minutes of the ride it’s possible to observe the whole beauty of this region: mountains, forests and breathtaking landscapes. Most visitors arrive in Tatev for hiking and other outdoor recreation activities. If you are among such enthusiasts, be sure to check out the post on Hiking in Tatev and why you should absolutely go for it.

It’s hard to believe but many things we use today in different corners of the world were once invented by Armenians (even though not always in Armenia).

Engineer Hovhannes (Ivan) Adamian wass one of the inventors of color tv with his  tricolor principle. His first experimental color television was shown in London in 1928.

Varazdat Kazanjian, a dentist and an oral surgeon was the first to successfully complete a plastic surgery. He founded plastic surgery and set standards that are widely used today.

Yes, ATM machines were invented by the Armenian scientist Luther George Simjian. This made our lives so much easier.

Alek Manoogian, a businessman and phylanthropist, invented the first one-handle faucet. It allowed mixing cold and warm water and controlling the water flow. Alek Manoogian patented his invention in 1950.

Raymond Damadian invented a machine and method to scan the full human body. He was the first to perform it in 1977. This method was first used to diagnose cancer. MRI has since been actively used as a highly accurate and safe scanning method.

And to wrap this up,

This list doesn’t reflect even 1% of amazingly interesting facts about the Armenian culture. It’s rich, flavorful, sometimes surprising, leaving room to think. There are yet tons of things for you to learn about Armenia and discover yourself in Armenia like the fact that Armenians have big noses and doing a nose surgery in Armenia is quite popular. So whatever you find interesting, exciting and mind-blowing, please share with me on Instagram or Twitter, with #ArmeniaTravelTips. 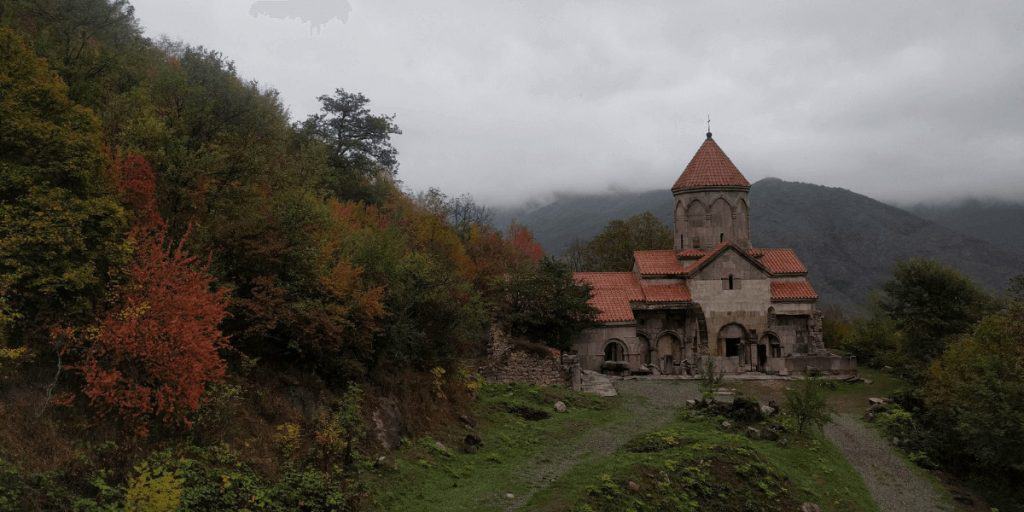