To this day there are always some controversies between cultures about food origins and what type of food belongs to what country. This question really got me curious, especially because of the thin line that exists between Lebanese and Armenian food as you can find Lebanese food in lots of restaurants in Armenia. So, I decided to do some research on it and why not write a post for you. I hope you can find it useful and clear some air for yourself about some of the differences and similarities between Lebanese and Armenian food.

The main difference lies in the condiments used in cooking – Lebanese food uses a much wider range of those. Armenian food is more based on meat and vegetables. Despite the differences, Lebanese and Armenian cuisines are very similar and share many common dishes like dolma, kibbeh, tabbouleh, and so on.

In this post, you will find more about the uniqueness that Lebanese and Armenian cuisines offer. I will also give you some options and recommendations about restaurants where you can try both cuisines in Armenia. In case you visit any of those restaurants don’t forget to share your thoughts with me on Instagram or Twitter with #ArmeniaTravelTips. I would love to hear from you!

Lebanese vs Armenian food: the basics

Lebanese food is truly unique due to the base ingredients used in Lebanese dishes, and particularly the condiments. Even though they cook in simple ways such as frying, baking, or grilling their condiments give a new level of dimension to their cuisine.

Parsley, sumac, rose water, tahini paste, various sauces, legumes and grains are some of the traditional flavors and ingredients that give a very different taste to their dishes. Lebanese cuisine is very well known for its falafel, hummus, fattoush, tabbouleh, baba ganoush, mujadara, and so on.

In comparison to Lebanese food, Armenian cuisine is quite extensive in using vegetables, meat, herbs, grains, and fish. Most Armenians love meat which explains why many of our traditional dishes have meat in them. It is really hard to think of Armenian meals without having those products used in making them. Some traditional dishes that Armenians are quite well-known for are khorovats, ghapama, tjvjik, harissa, khash, spas, manti, lavash, and so on. And in case you are a meat-lover just like any Armenian, check out my review of Bar B.Q. Yerevan, one of the most popular fast food places in our capital city.

Similarities between Lebanese and Armenian food

Historically Armenians of course didn’t live in isolation, so it’s not surprising that our cuisine shares a lot of its aspects with other cultures in the region. That is why you can find lots of similarities between Western Armenian and Lebanese cuisines. Just like with Greek and Turkish foods as well. So, it’s not surprising that all types of mezzes like hummus, tabbouleh, moutabel, or dolmas can be found in all food cultures of the broader region.

Speaking of tabbouleh, Lebanon’s national food, there is a similar salad in Armenian cuisine, but we add bulgur to it. It’s called eetch or itch. It is often served as a light vegan Armenian appetizer. It can either be eaten at room temperature, warm, or even cold. Besides bulgur, the recipe also includes puréed tomatoes, onion, parsley, lemon, bell peppers, and paprika. I love it!

Some dishes that foreigners are usually less familiar with in Lebanese cuisine are kibbeh and warak enab. Kibbeh is a dish that is served either raw, grilled, fried, or stewed. The main ingredients are meat, goat, onion, and basil. It is very similar to what Armenians call “Ishli Kufta”. So, we’re very familiar with that dish here in Armenia. Variations of kibbeh are also available in other cuisines.

Warak enab is another Lebanese food that is basically the same as dolma which is very well-known in Armenian cuisine. Minced meat mixed with rice and various condiments is wrapped into wine leaves and cooked in boiling water under pressure. Delicious!

Where to eat Lebanese and Armenian food in Armenia

There are plenty of restaurants in Armenia that offer authentic Lebanese and Armenian food. You can obviously find a ton of places on the internet but I made a quick list for you. Some of the best restaurants for trying Lebanese food in Armenia are Zeituna, Derian Restaurant, Beirut Bar & Restaurant, and Byblos Grill and Bakery. But then you’re gonna want to compare it to Armenian cuisine! For that go to Lavash Restaurant, Tavern Yerevan, Dolmama or to Mayrig Yerevan.

Some of these restaurants serving Lebanese food are an absolute must-visit in my opinion. Similar regional cuisine can be found in various venues across Armenian cities. I also recommend that you check out my post about halal food in Armenia, where I put together an overview of the best places that serve dishes made in accordance with Islamic protocols. Some of those restaurants are among my favorites even though I myself don’t practice any religion.

In case you’re curious to get to know Armenian food better you can check out my post about some of the must-try Armenian dishes. It has plenty of yummy options for inspiration. One thing is certain: if you’re going to visit Armenia and you want to try both Armenian and Lebanese food here, come with a huge appetite to enjoy your stay fully. We’ve got a lot to offer here!

So, to give you a brief summary on this topic, I can surely say that Lebanese and Armenian food is quite similar and different at the same time. Lebanese cuisine uses a much wider pallet of condiments, while our cuisine in Armenia focuses more on quality meats and vegetables. And despite differences, Armenians love Lebanese food which is why it is so well represented in Armenia.

Of course, the food is truly authentic for a certain country when it’s made and served in that country. So, it would be silly to assume that the Lebanese food in Armenia could be as authentic as it is in Lebanon. But, honestly, I’m fine thinking that Armenia is the second-best place for tasting Lebanese dishes. 🙂 By the way, if you like such comparisons between cuisines you may also want to read about Armenian and Turkish food.

Enjoy your food trip to Armenia. And make sure to take good pictures of the food you try and share your experiences with me on Instagram or Twitter with #ArmeniaTravelTips. I am looking forward to your feedback! 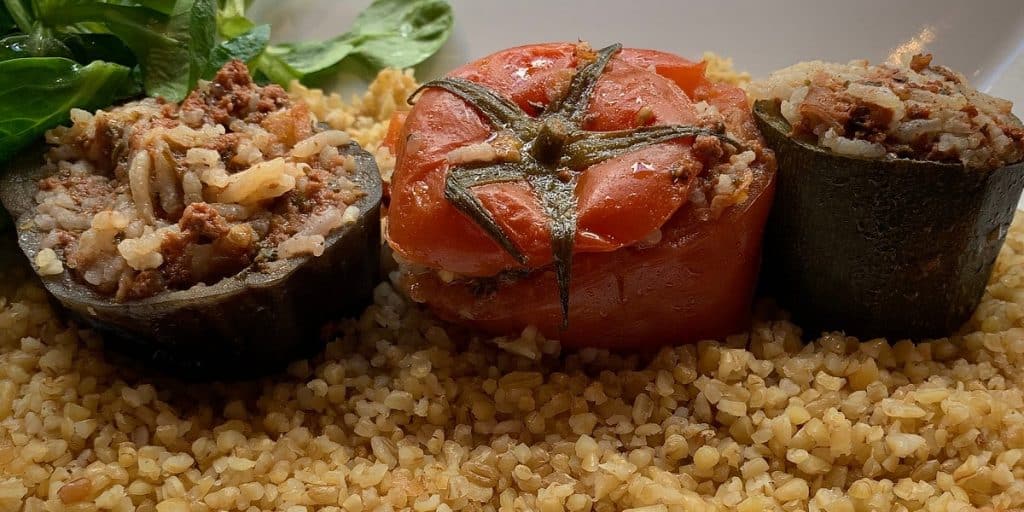